Million Air is excited to announce a network strategy to control, reduce and offset its carbon emissions at all network-wide locations by the end of 2023. The commitment reflects the brand’s focus toward becoming a more sustainable organization and better stewards of the environment.
“Our strategy recognizes there are two sides to general aviation’s opportunities to reduce carbon,” said Sandy Nelson, Chief Brand Officer of Million Air, “not only by providing sustainable aviation fuel to our carbon reduction committed customers, but also ensuring Million Air is equally focused on carbon reduction efforts at its own facilities.”

The first Million Air location to offer sustainable aviation fuel was Million Air Burbank in June of 2021, in partnership with Avfuel. SAF is the most effective way to reduce a flight’s carbon footprint. To quantify its benefit, each truckload (approximately 8,000 gallons) of SAF provides a 22-metric ton reduction in carbon emissions over its lifecycle, which is the equivalent of making five passenger vehicles zero emissions for one year. Committed to helping customers significantly reduce greenhouse gas emissions, Million Air plans to feasibly expand its SAF offerings at key locations across the network as production progress is made and continues to develop.

Related to the carbon reduction efforts of the Million Air facilities, the first location targeted to achieve carbon net zero will be Million Air White Plains followed by Million Air Burbank. Million Air White Plains has a significant head start since it was designed and has continued to implement significant upgrades to reduce emissions of the FBO operations. Recently, the FBO campus was converted to natural gas, and has incorporated a large portion of natural lighting to reduce electrical consumption while converting the campus to 100% LED lighting, and the use of Reflective White Coating on hangar roofs to reduce heat gain in summer.

Along with active efforts to reduce carbon, Million Air will use carbon offsets sourced from high quality carbon reduction and avoidance projects around the world. These projects provide carbon offsets which are used to offset Million Air’s FBO emissions. High quality carbon offsets are backed by international standards, must support real emissions reductions that are permanent and ‘additional’, which means that they would not have been achieved without carbon finance. Other Million Air locations will be scheduling their initial carbon assessment along with similar carbon reduction plans.

Million Air is also expanding its environmental and sustainability strategy to educate and promote its efforts to visitors at various Million Air FBOs. Some of these visible efforts will include converting Styrofoam to recyclable paper cups at our hospitality bars, recycling refuse, EV charging stations, landscape replacement to carbon consuming plants like Cottoneasters around the drive areas of the facility which traps 20% more emissions and reduces carbon emissions, use of biodiesel fuel for ground service equipment, and solar panel installations across key airports. Million Air will take every opportunity to use infographics and talking points to educate, promote sustainability and care of the environment.
“The opportunity to educate our visitors in the process,” said Sandy Nelson, Chief Brand Officer “excites us to share what our visitors are noticing, why, and how we are doing our part as stewards of the planet.” 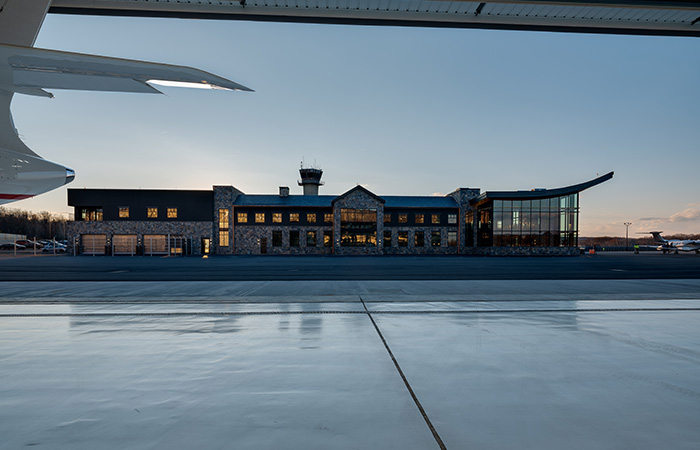